Age Gates Are Becoming a Thing of The Past 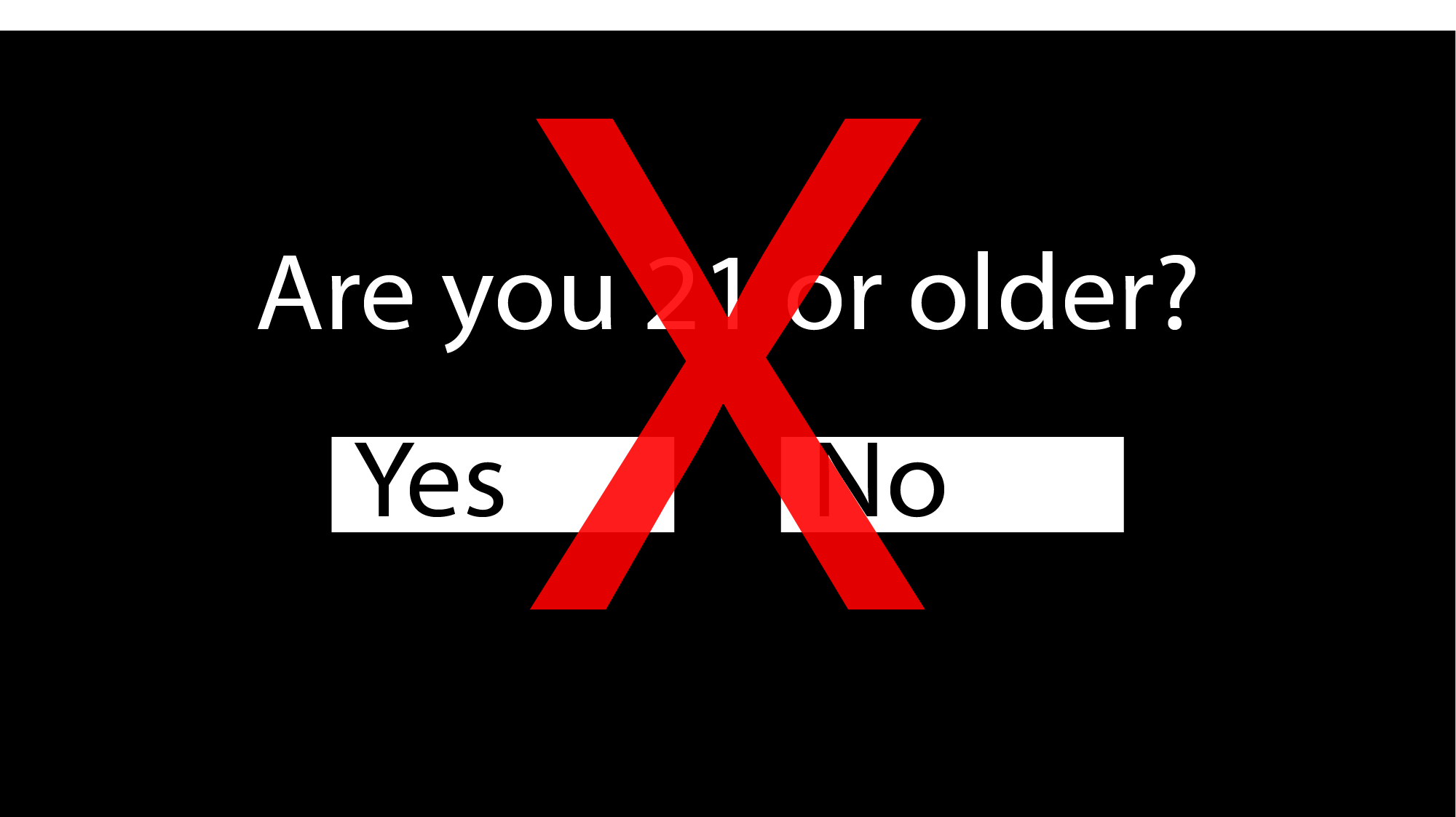 Websites that ask customers to enter their birth date or check a box to verify their age – also known as “age gates” — have been around for decades now.

With an age gate, a visitor to such a site is asked to put in their date of birth or otherwise represent their age before entering an age-restricted site or purchasing a product.

Nothing is done to check the information provided by the website visitor. They often serve as the only barrier to content and purchases that have legal age limitations.

The use of age gates has gained additional popularity with the rise of vaping, age-rated video gaming, online sports betting, pornography, firearms, and cannabis websites.

The problem (depending on your perspective) is that age gates are easy to fool. All an underage customer has to do is lie. It begs the question: Why use them at all?  The short answer: It’s better than nothing.

For many websites, it’s more about the message having an age gate sends than the actual strength of the protection. What’s more, it is an inexpensive and easy to implement method of trying to cover a business’s bases. With the many types of age gate apps available, it’s not even something businesses need to create themselves.

Unfortunately, however, age gates are becoming a thing of the past.

In the past, age gating allowed the website owner to show governing bodies that the business took steps to avoid exposing minors to content or products they are not of legal age to consume. It puts the onus back on the consumer by requiring either verification or deception from the potential customer.

But age gates are no longer good enough in many places, and for many types of products.  For example:

More specifically, in order to sell tobacco and nicotine vaping products in California, the seller has to “match the name, address, and date of birth provided by the customer to information contained in records in a database of individuals whose age has been verified to be 21 years or older.”  In addition, under California law, the seller has to “also verify that the billing address on the check or credit card offered for payment by the purchaser matches the address listed in the database.”

Similarly, Great Britain, Holland, and Germany, and other countries prohibit online gambling and sports betting by persons under 18 years of age, and age gates are not enough to confirm age.

The above examples are indicative of a worldwide trend, not to mention in various states just within the United States, that is decreasing the continued viability of age gates.

Problems Even When Age Gates Are Still Allowed

Even when selling age-restricted products to people in places that still allow age gates, the fact remains — most people lie on age gates.

In fact, people who don’t strictly “need” to lie on age gates still do so. Customers have neither an obligation nor a tangible incentive to tell the truth. So, most of them don’t.

It’s often easier to fill out the age gate form with random information.  For example, if a company’s age verification system uses dropdown boxes, it is often simply faster to select a birthdate of 1/1/1900 or the like as opposed to searching for and entering the accurate information.

In addition, some people are hesitant about sharing that sensitive piece of birth date information so early in their relationship with a new company.  Incidentally, people don’t need to be that concerned. Because companies know that everyone lies on age gates, they almost always don’t actually use the birthdates provided as viable information. And consequently the sites that use age gates are not going to be valuable targets for serious cybercriminals.

All of this is a long way of saying that, if a business is required to verify age, but is only using an age gate, the business is not reliably verifying anything.

The primary drivers for using age gates are:  (1) low cost;  (2) ease of setup and configuration; and  (3) ease of customer use.

All of these factors are met with applications like Konfirmi.

First, Konfirmi has a very low cost. The app does not have any monthly fees or usage minimums.  Instead, Konfirmi charges only $0.019 – only about 2 cents – per use.

Second, Konfirmi is very easy to set up.  The apps website contains a video showing Konfirmi being set up in only about 4 minutes.

Third, Konfirmi is no more intrusive to your customers than an age gate!  The app pulls information directly from your website’s purchase or age verification form, and then gets the consents required under various countries’ laws.   That’s it!

Konfirmi allows you to easily verify your customer’s age over the internet by cross-referencing the information with billions of records maintained by multiple reputable third-party data providers.

Products like Konfirmi provide low-cost and low-overhead age verification.  And they are also easy for website visitors to use.

By any reasonable standard, age gates are something of a paper fortress.  The fact that it’s effectively just “for show” means that your customer’s age is really not being verified at all.

For this reason, websites can no longer use age gates for many different types of products and services and in many states in the United States, or in the United States as a whole, or in various other countries.  Even when age gates are still allowed, it is just as easy and inexpensive to implement and operate an application like Konfirmi as it is to use an age gate.

As the reasons for retailers of age-restricted products or content to stay with age gates start to melt away, age gates are quickly becoming a thing of the past.